Taglines are the quickest and most efficient way in your marketing strategy to tell people about your nonprofit organization’s mission. In one short phrase, you can tell your audience who you are and why they should care.

Think about Nike’s “Just Do It” or Little Caesar’s “Hot n Ready” – these taglines give the brands more energy and character. A great tagline can work the same magic for your nonprofit.

Even though they are an incredibly useful tool, taglines are overlooked in the nonprofit world. In fact, 71% of nonprofit marketing professionals consider their organization’s tagline as the least effective element in their messaging.

To stand out from the rest, learn about taglines and how to write one for your mission-driven organization. Here’s what we’ll cover:

Read on and you’ll be ready to create a clear, concise, and catchy tagline for your nonprofit in no time.

What is a nonprofit tagline?

A tagline is a short, memorable phrase that succinctly captures a brand’s message. Once it becomes well known, a tagline also acts as a way to easily identify the brand it represents. Specifically for a nonprofit organization, a tagline should communicate its mission and purpose. 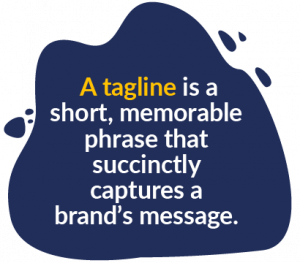 There are five types of taglines that are commonly seen in the nonprofit marketing sphere:

Also, taglines are not the same as slogans. A tagline is one phrase for the overarching idea of an organization. Slogans, on the other hand, accompany specific marketing campaigns. An organization could have multiple slogans for many different campaigns, but it will only ever have one tagline at a time.

To find more information on how to come up with the most powerful fundraising slogans, check out this comprehensive guide on nonprofit digital campaigns.

Now you know what a tagline is, and what it isn’t, as well as what are the five different types of taglines. Next, we’ll discuss why taglines are important for your organization and why you should care about them.

Do nonprofits have taglines?

The short answer to the question of if nonprofits have taglines is yes, they do have taglines. However, seven out of 10 nonprofits rated their tagline as poor or didn’t have one at all. That means they’re not nearly as abundant as they should be.

If you fall within that seven out of 10 designations, it’s worthwhile to reevaluate your nonprofit’s tagline strategy. Here are three benefits to having an effective tagline for your mission-driven organization:

Convinced your nonprofit needs a strong tagline? Let’s look into what makes a tagline strong, and how to create one for yourself.

What makes a good tagline?

Coming up with a phrase that represents the entirety of your nonprofit in eight short words (or less!) is no easy task. Luckily, we’ve compiled a list of characteristics that will make your tagline stand out from the rest. We’ve also got the steps you can take when you start the process of drafting your own.

6 Attributes of a Strong Tagline

Let’s start with the attributes of a strong tagline:

Wouldn’t it be frustrating for us to tell you what makes a good tagline, but not how to write one? Don’t worry – we’ve got you covered with five steps to writing your own stellar tagline.

5 Steps to Coming Up With Your Very Own Tagline

The technique of writing a tagline is very similar to other creative processes. Your nonprofit needs to know what it’s aiming for before diving in, and be open to where the brainstorm takes you. Here are our five foolproof steps to writing a tagline:

For in-depth advice on all facets of creating a nonprofit marketing plan, check out this guide. And if you want some expert-level help marketing your nonprofit, check us out here at Getting Attention.

Next, we’ll look at some examples of excellent taglines to get your creative juices flowing.

So far, we’ve given you some examples of memorable taglines in the for-profit space. Now we’ll provide you with some nonprofit taglines, ones that are more similar to your organization.

Here is a list of six strong nonprofit taglines organized by the size of the nonprofit:

These examples come from organizations whose mission extends to the entire world. Check out their taglines for clear illustrations of how to condense a concept that large into eight words or less.

This tagline is simple, meaningful, and memorable. The repetition sticks in people’s heads, and the welcoming nature of the writing reflects what this organization is about. According to its website, the mission of the United Methodist Church is “to make disciples of Jesus Christ for the transformation of the world.” With its tagline, the church is communicating that it is open to all people joining along in its mission.

An even better example of simplicity, UNICEF’s tagline clocks in at three words and expresses what UNICEF is about at its core: working toward the “survival, protection, and development” of children all across the world, according to its website.

Nonprofits of this size need worldwide recognition, and they utilize taglines to help achieve it.

Although these examples come from nonprofits slightly smaller than those of the former examples, their taglines feel equally as strong. Read on to see how national nonprofits tackle taglines:

The United Negro College Fund “envisions a nation where all Americans have equal access to a college education that prepares them for rich intellectual lives” and works to increase the total number of Black college graduates in the U.S., according to its website. This tagline provokes thought relevant to the organization’s mission, calling on their audience to ponder how valuable people’s minds are— and subsequently, consider what they can do to encourage educational growth.

Every word in this tagline holds enormous weight in the message it’s conveying. Common Cause is a nonprofit that exists to ensure the United States’ democracy fairly serves all its constituents, and does so by fighting for pro-democracy legislation like the recent Freedom to Vote Act. The tagline succinctly expresses that sentiment— and it has a serious tone that matches the organization itself, too.

The United Negro College Fund and Common Cause are excellent models for provocative and descriptive taglines, respectively. Think about which type would best fit your nonprofit.

Now we’ll look at nonprofits that while small in size, have taglines that feel larger than life.

Just because this nonprofit operates in a smaller area doesn’t mean its tagline is any less impactful. The Montana Historical Society describes itself as a “guardian of Montana’s history,” a history that this tagline appealingly illustrates as an expansive one full of sky and land.

Second Helpings Atlanta is a locally based nonprofit that fights both food insecurity and food waste in the metro Atlanta area by delivering leftover food from restaurants and grocery stores to individuals in need and food banks. This tagline is on the longer side, yet remains memorable and clearly depicts what SHA volunteers do: drive leftover food from somewhere that doesn’t need it to someone who does.

Again, these are just some good examples for inspiration. Don’t get too caught up in what other nonprofits have done that you miss the chance to come up with something amazing and completely outside the box for your own mission-driven organization.

If you need more brainstorming resources, look at this guide to all the best nonprofit marketing blogs. They all have plenty of articles ready to help you come up with creative marketing plans, including but not limited to excellent taglines and powerful fundraising slogans, for your nonprofit.

A strong, well-written tagline can exponentially elevate your nonprofit’s brand and marketing efforts. We hope this article has been helpful to you in learning what a tagline is, why they’re important, how to create a great one, and what examples are out there.

Getting Attention can also help take your marketing strategy to the next level, especially in getting your brand new tagline to the top of Google’s search results. Get a free consultation today!

Before we go, here are three extra educational resources for your nonprofit: